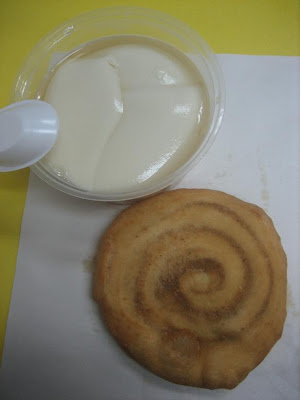 I get excited over simple things. Plain & pale, nothing elaborative, like a plain scoop of matcha ice-cream, a bowl of tasteless white porridge, or even a plate of sashimi without wasabi.
And guess what, that really gets my adrenaline pumping when I stumbled upon this self- acclaimed "best tau hueh with chinese crullers (yaw char kueh) in Singapore and maybe Johor Bahru". I knew I have to try it. Tonight itself. 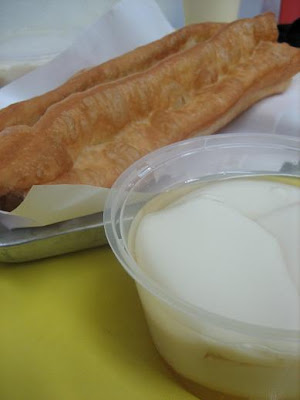 Chinese crullers and tau hueh (or known as 'tau foo far' in Malaysia) are my all time fave food but pairing them up was my first attempt -- and they just don't match.
Bar none, I've heard about pairing up crullers with salted hot soya milk in Taiwan and it's apparently the fave breakfast for the Taiwanese. For now am already hallucinating about soaking the crispy crullers into a bowl of piping hot soya.
Tau hueh - $ 1
Crullers - $ 0.90 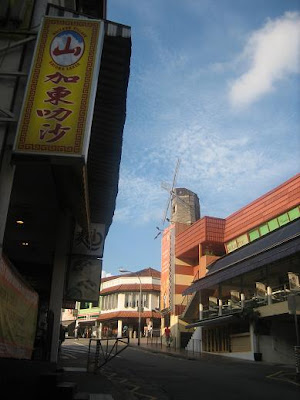 Her eyes were rolling so big and look like they are going to pop out of the eye socket anytime soon -- as she yelled at me "You mean you are a food blogger, 10 months down here and you've never tried Katong Laksa ??"
What the heck, I was thinking. Can that bowl of ever famous Singapore Katong Laksa tasted more heavenly than my fave Sarawak Laksa? 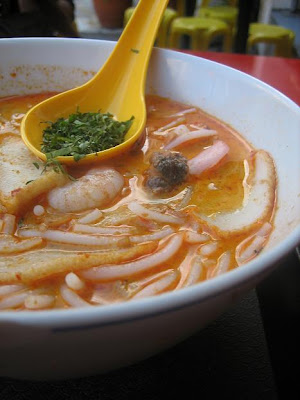 I paused for a while after the laksa was served -- "Don't they provide chopsticks?"

He looked at me as if I've asked the most idiotic question ever -- "Don't you know that Katong Laksa is supposed to be eaten with soup spoon, a.l.o.n.e?"


I added 3 heaped spoons of chilli paste into it wihout even sampling the taste. *Blush* I felt like being whacked by a broomstick. Talk bout underestimating Singapore's chilli paste. The laksa is actually fiery on its own.

That really made me ponder a bit.

There were times when I hope things could be simpler but you chose to go against the flow, just like a complicated judgment that need to be read over and over again till I find the full stop.

But I've came to term with it. At least I know that when everything fails on me, I can still find solace in that plain bowl of beancurd, a bare piece of cruller or a simple bowl of Katong Laksa.

My quantum of solace.

Katong Laksa - other proper review
Posted by Xiu Long Bao at 12:10 AM

the yau char kway was kinda good, eh? and that katong laksa's kinda good as well.

welcome back on the blogosphere. i hope..hahaha!

Katong Laksa? Hmmm... I think Sarawak Laksa taste better anytime! If you want the Sarawak Laksa paste, tell me. I send to you and you cook for your friends. I guess they'll agree that Sarawak Laksa will be better! kekekeke!

That Tau Huey and Yau Char Kueh looks good. I want I want!

aiyoh where have u been? so out of touch ar?

I haven't tried the Katong Laksa... it looks so good! Must try whenever I visit S'pore again :)

Haha. Katong laksa hor, they cut them in shorter length (I mean the noodles lah) so it's more suitable to use the spoon than chopsticks.

And welcome back! Already 10 months ar?

Nic:
I was craving for that piece of yau char kway when writing the post but i dun think u'll revisit lor. I take that congrats is for my new vocation :)

Kok:
Lol...i know i was missing in action was quite some time. Seriously i miss that bowl of Sarawak Laksa. Can mail the paste to me :p (tak malu) I'll trade the laksa paste wiv something else in return. Come visit SG lar.

Tummythoz:
Lol...I'm zany? I take it as a compliment :p

Selba:
Hi there. The Katong Laksa is good. They have a few outlets across the island. Must try whenever u revisit SG :)

Jason:
Yalor, 10 mths down here d. But i still prefer to have noodles with chopsticks mar. That's y chopticks were created in the first place, no?

xiu long bao,
I can mail to you, no problem! There's another friend who wants me to mail to her anyway. haha! Give me your address. You have my email eh? ;)

Aiyo, I also wish I could go to Spore. I almost went there last October but aih... anyway, I'll try to go and find you! But not so soon ok? Cause just started work mah. hehe. Maybe in June when I have 1 week holiday!

Take care there and don't forget to send me an email for few packets of Sarawak Laksa Paste!:D

Hahaha don't worry. I been to Spore so many times, not even once I'd thought of trying Katong Laksa. Although the tv ady feature 2 times but still it never cross my mind when I was there :P

Actually don't have to so mahuan go to that particular place for dau huey. I'd been to this shop call something Silver. Not nice also. I expected thick thick soy drink and all I got was watery soy drink.

Jollibean and You Tell at CK Tang's underground are sufficient.No kidding. Jollibean is really good.

LOL other proper review. I think it's time to visit my sis again, hope can hitch a ride in my brother in law's car when they come back during CNY.

Gosh! I had stop at this two places but not having you around tho, *sob*, *sob* . . . but it was great fun meeting up with you and nic boy at "lau pa sar" and best of luck on your career!
Laksa(curry) at Katong was awesome! so creamy adn yet so fragrant! The long crispy fritter was delicously crispy deep fried and got along well with the soya milk! I still prefered mine cold! it was a long walk from 5th street, geylang to their nes place at 27h street! but worth the walk!

cokeworld citizen:
Normally I go for Mr. Bean. It is equally good. For beancurd, it is best eaten in KL lor...haha...
Me going to CK Tang tonite, good to know that there is this 'You Tell' shop, will give it a try later :)

simon:
Jee...so envious, can hitch a ride down south. You know how tiring it is to travel by bus...goodness, sometimes up to 7 hours ride.

BBO:
You went to these 2 places as well? Wow, extensive research done. Hope you enjoy ur trip here :) See u again...