So off we went to Holland Village to source for good food, not to mention that he kept pissing me off by suggesting sushi and sashimi. At last he decided to give N.Y.D.C a try, featured by wmw recently. 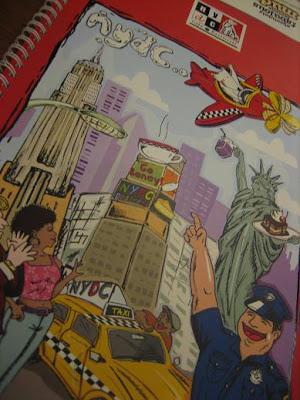 Have to admit that I was more impressed by the ambiance and the interesting menu rather than their food. The setting is vibrant and lively with colourful paintings around. Their menu is the most creative I have ever seen in my life, it is as good as reading kiddo story book. Each of their dishes are uniquely named. I had 'The Picasso' which was basically a 7-inch pizza with toppings of your choice. The greedy me chose 4 toppings: italian ham, pineapple, mushroom and bell pepper. The pizza base costs $8.95 and the price for each topping ranges from $1.50 to $2.25. 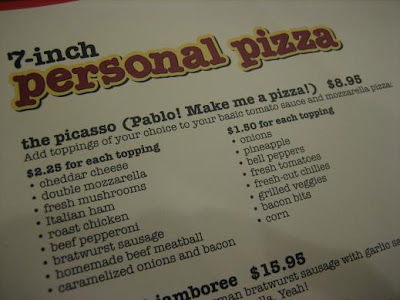 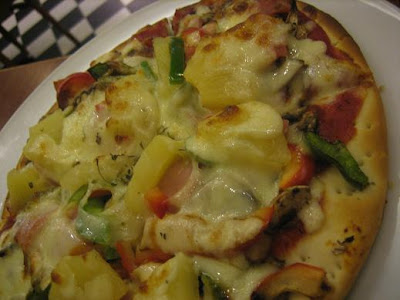 Pakcik had the 'Tears of the Heaven' priced at $15.50 (Choi, why you choose this dish on your birthday). The dish came loaded with pork bacon and spaghetti in creamy sauce. As usual, his comment is 'I cook better spaghetti'. 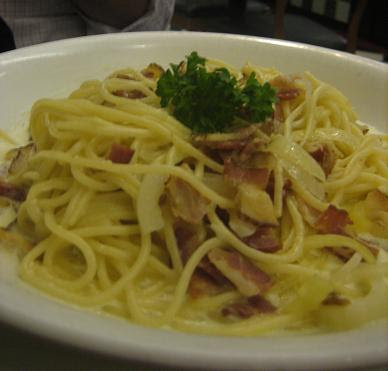 The dessert menu was extremely tempting, thanks to their funky names. I went for their 'Mango Tango' ($10.50) which came with their signature New York cheese cake and homemade mango ice-cream. 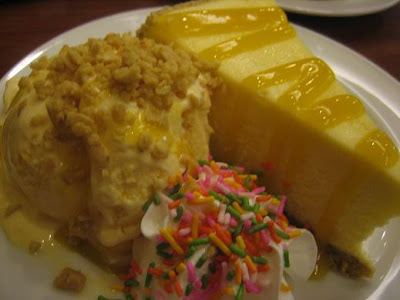 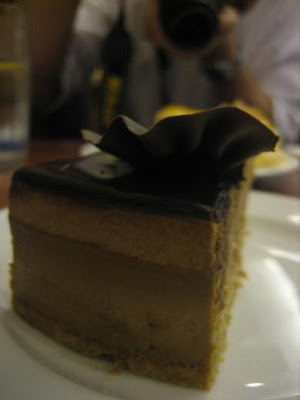 He finished his piece of cake. 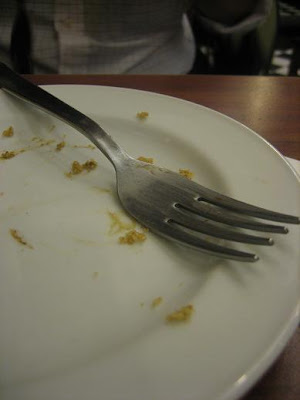 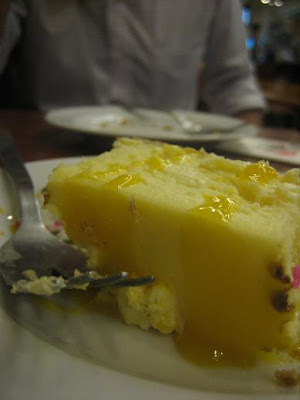 And I was caught sulking at the aftermath. 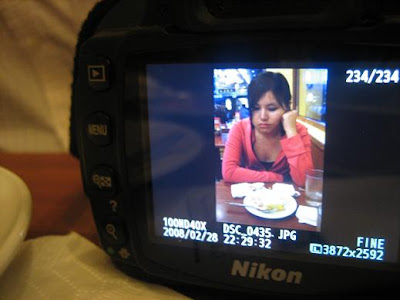 As quoted by uncle, the service was excellent but the food was far from excellence. For me, my only complaint was that piece of New York cheesecake which was overated.

Last but not least, happy birthday pakcik!
Posted by Xiu Long Bao at 1:19 AM

Hahaha...I like your "Choi..."! Anyway, looks like the food is indeed average there and not so because I wasn't well that time.

At least the company was good I'm sure.

wow so much food...lolz...hm never seen u trying their hawker food since you step down at Spore (ok except for ur chicken rice).

Wah sweet young things like you guys being called Pakcik/Makcik, then the rest of us how? Have to call Datuk/Nenek di, issit? LoL.

miss, it's tears in heaven lar...aiyer, dunno who rolled eyes leh when i asked if it was auspicious or not?

all in all, thank you very much for the dinner. walking down a few blocks in heels somemore. ochacha, ya?

The food actually looks good but it sounds quite average as you described.

you can follow pakcik's footsteps to become the next poet ;P
uh.. I never like NewYork cheesecake. had a terrible one last time.
Nic is sure lucky to have the xiu long bao with him during his big day! :)
was he touched? hehe.

Walio! why why why you guys dont wait for us! hmmmm I still thought we are all near by! lol!
Hey folks! we are planning to be in Singapore for the food show in mid April, this should be interesting!

i found u r using nikon camera,which model u use?
i plan to get 1~ hehe ^^

Hey, next time I go Singapore must bring me to eat good food.

wmw:
yalor, the food was disappointing leh....esp the dessert. But i like the funky menu and ambiance though, so no harm trying afterall.

president LL:
yes it was, with that poet who rhymes all the time...when walking, when taking mrt, when browsing thru the menu and when eating.

cokeworld citizen:
Eh, me aint no makcik k! I worked in tanjong pagar with loads of hawker food around. always go for hawker food during lunch time one lar, sienz leh!

kenny mah:
oh, dat depends on whether one grooms and shaves his goatee *grin* U definitely look young, no worries...haha...not qualified as datuk yet.

ekeng:
Eh, when r u coming over lah?

nic:
luckily u got the direction right if not u'll have to angkat kasut for me. ochacha...haiz!

wenching & esiong:
The presentation was lovely but the dessert was disastrous for me.

christine:
the cheesecake was very disappointing, no more new york cheesecake for me in near future. *ahem* of cus he is honoured to have JFKA honourable life long member to celebrate his big day. yes or not pakcik?

BBO:
mid april ah? pakcik will be locking himself up in his room to study for exam but no worries, im always free n easy. keep us updated k?

teckiee:
that shows how sad n disappointing i was lah...haha

et:
oh, that nikon camera is pakcik's one. lemme find out for more expert opinion for u ya.

simon:
no prob, just us know if u r coming over :)let's go makan!

You should try the boney cake or something like that =p It's warm moist choc cake with vanilla/choc ice-cream. My friend's all time favourite!

weiks...tot u say u constantly have jap lunch at the begining. How did you find jap food in a sea of hawker food? lolz memang Honourable JFKA Life Long Member indeed.

Bring your own lunch oh. At least can opt for healthier food for that moment....then...pig out la after work...hehe....after work not at tanjung pagar d wat. Or at least you can choose not too. lolz...