I can’t believe that I’m still lost with the MRT system in this small island. Okay I admit I’m hopeless. I can still get on to the wrong train even in KL itself. I was overwhelmed by the crowd in the MRT, along the road, in the shopping mall, etc etc. The living space is amazingly ‘cosy’ (open the door and jump onto the bed in no more than 2 steps). I felt extremely exhausted without my car. I miss my car.

But thanks to you. The crazy Japanese food galore made my stay fruitful. 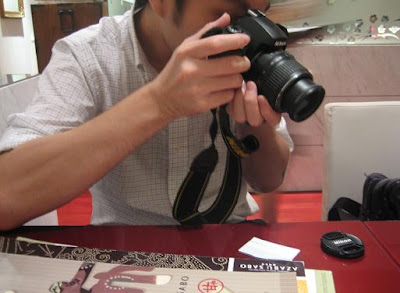 Too bad I left my camera at home on the first day :p To view similar food pix, check out his previous review here.

The dinner was great, we had a few Hokkaido Promo Items like the killer Otoro Sashimi, seafood ramen and something something salmon. I think I had 80% of that plate of sashimi. President LL, you may consider recruiting him as our Singapore rep for JFKA.

The next day we walked all the way from Cityhall to Marina Square when sourcing for good Japanese food and we found Waraku. 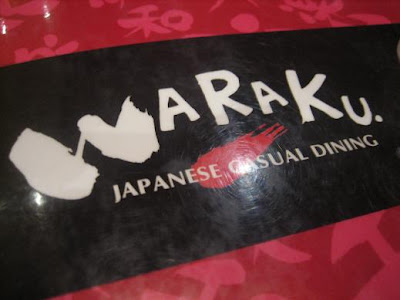 The pricing is more or less similar to Sushi Tei, affordable (if you don’t convert lah) for the fine quality of food you can get there.

I had the Waraku Reimen (Cold Noodles) priced at $9.80. I love the toppings and the springy noodles but the sesame sauce for dipping was abit greasy for me. 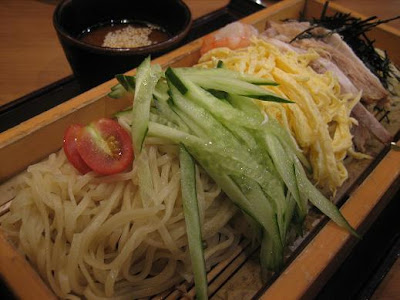 Mr. food guide had the Porky Udon priced at $12 ++. The oversized bowl of Udon came with one big chunk of pork with a few layers of sinful fat sandwiched in between. 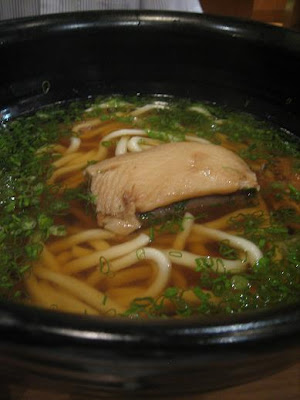 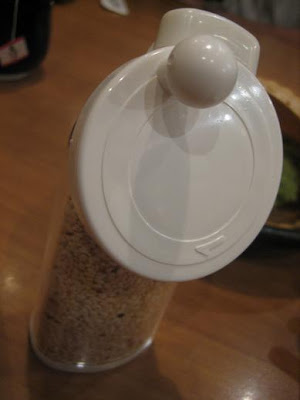 For dessert I had the Matcha ice cream as usual, priced at $3.80 (cheap cheap, if you don’t convert lah). 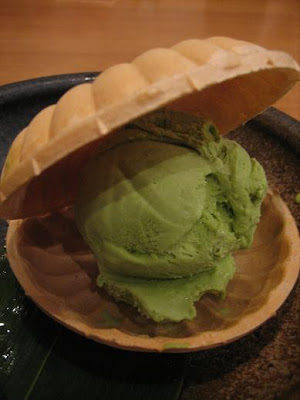 His eyes glowed when he saw this Truffle ice cream in the menu, priced at $8. I thought it tasted fine cause it was my first time sampling truffle ice cream but he seemed to have a lot of complaints bout it. Check out his review (coming up soon). 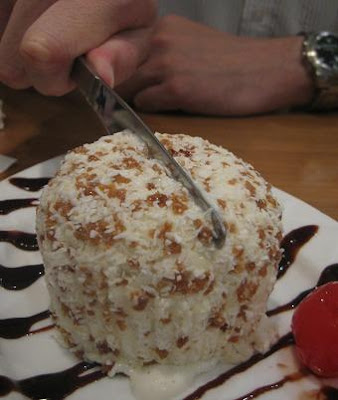 We went back to Marina Square to hunt for good Japanese food (again). How crazy can one go after Japanese food? 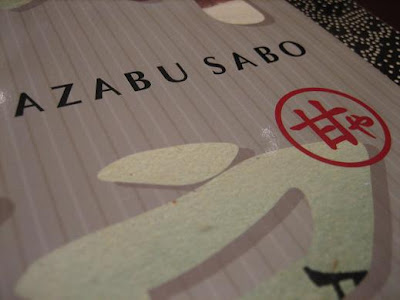 Azabu Sabo is famous for its wide range of Japanese desserts like matcha & black sesame ice cream served in numerous ways. I really had a hard time deciding which dessert to go for.

Finally I settled for one large bowl of matcha ice topped with vanilla sundae ($ 8.80). 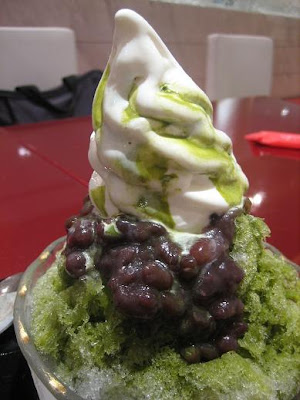 And another bowl of black sesame ice. 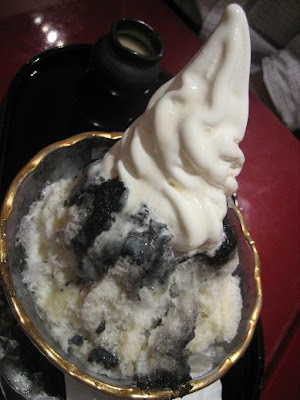 The desserts are certainly more exciting than the mains. I had the sabo style teriyaki chicken rice bento ($11.80) while he had the pork cutlet with scrambled egg bento ($13.80). Tasted average. 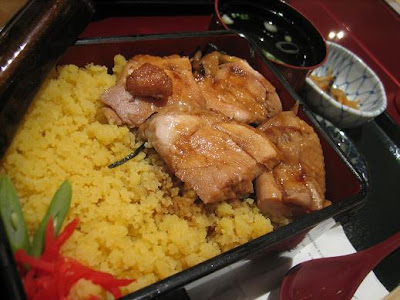 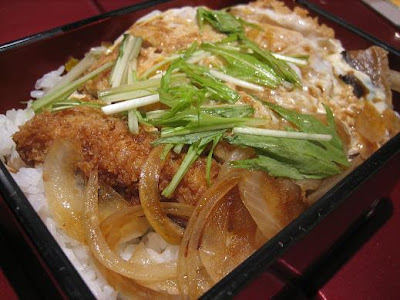 I love Azabu Sabo (desserts only).

I now declare this island as a safe place for JFKA members to hunt for good Japanese food.

Next stop gonna be the Central Plaza in Chinatown with one building of Japanese restaurants. *Anticipating*
Posted by Xiu Long Bao at 1:29 AM

Thank you for your recommendation. I shall be interviewing this candidate this weekend. Results will be announced in due course.

So much food! But at least got cooked ones for me when I go over :o)

Nic is such a nice guy..Ehh,don't said you're hopeless la..it's take time for you to get the right train :)

Walio.... so much japanese food on search! gosh we must have you there station, so when come to food, we seem to trust your taste! lol! Wah a toast to your Mr Food Guide!

Wuahaha!Welcome aboard to the Art of Living in Singapore = MRT+Bus+"people mountain people sea" but fear not, good Jap food is all around! =)

he is still recovering from the brain-freezing experience at azabo, complete with a cold. he is drinking a lot of hot water now..haha!

wmw:
Aye, when u come over we go makan other good stuff. No sashimi, no seafood for u, okok.

BBO:
Of cus can trust me lar..haha! Come over for good food lar!

Jojo:
Yalor, abit overwhelmed at first but getting used to it already. The crowd!!!

Nic:
*AHEM*
What are you trying to say ah? Pls review your MRT training course. How come I still get on to the wrong train on the wrong floor towards the wrong station on my 5th day...haiz!

mamabok:
Yeap arrived d and having fun here :D Thanks for the info ya!

wow...so much good Jap food!! :)
and bet you hv no worries on where to dine in next since Nic definitely will not be reluctant to show you around! so nice..!!

xiu long bao,
I hope you've more or less settled down in Singapore. If not, let me know so I can call my friend to help. :)

Lolz you had so much jap food!
Hokkaido Fair still on??? You should try their hokkaido scallop ramen...but i only had ajisen ones...dun order salah. see the word hokkaido only order. lolz...

singapore is japanese food heaven la...You will never go wrong there. My aunt say newspaper have food reviews on restaurant.

I think Singapore MRT is one of the best. You don't really need a car unless you shop tons : P I think you can get a map online hehehe dun worry its only a small island.

Have you started work there?

Gosh I miss Singapore so much...

eh wat is this?? how come my application to b a member still not approved and you are considering another applicant? hahaha..

glad you have settled dwn in sg very very well..definitely have not lost ur appetite!

The interview didn't take place due to unforeseen circumstances. We shall keep everyone updated on the interview process in due course.

P.S. Disgruntled applicants to the committee (Nipples) may write in stating precise reasons why they have been discriminated against. The committee will have a hearing if there is a case to be made.

As a Committee member of the JFKA, I vote for Nic!

So, now you can put up sgworkersgfood.blogspot.com, LOL.

Hey, I want to apply for JFKA too. If still got discrimination then I'll form JFLA - Japanese Food Lelaki Association like YMCA and YWCA.

christine:
Am missing the jap food now! We already have in mind where to dine next, gosh two gluttons here make wallets go kontang :p

kok:
Yeap, settled down d, as u can see from my gluttony post :p Heard dat Brunei has a number good jap restaurants. Come to KL or Sg lar, we can go makan :)

cokeworld citizen:
U tried the hokkaido promo items as well? But ended already lor, just in time for me :p I know lar, hopeless in direction haha...getting used to the MRT system, but lazee to walk around without my car lor. Will start work after CNY, see u in Sg ok? *tempting u with jap food*

teckiee:
hmm...u coming down rite? No worries, ur stomach won't go upset with the food in sg :p

joe:
Eh, why wld i lost my appetite leh, so much good jap food in sg. I think u have to post 6 jap reviews in a week time to speed up the approval process...haha...Gud luck :p

Dearest dearie president LL:
Thanks for the update. We shall come out with more ideas on how to torture the applicant.

Hearing for disgruntled applicant shall be held in a 5-star Japanese Restaurant, all costs shall be borne by the said applicant (nipples).

simon seow:
Eh, gender discrimination ah u, how am i supposed to join if u form JFLA :p

hehehe.. I like sushi tei! can't wait to try the others as well. Good luck with the MRT system, gets me a while to get my head around each time i head back. =)

Glad that you're enjoying the food there ;)

yeah...the scallops were fabulous...love it to bits...i never had scallops that are sweet.

Eh I go Singapore a week and ate like 5 singapore meals in that week, how come i dun get to be a member? *showing proof in xanga*

wah so syiok ar...then u not going back to KL for cny? have u visited the chinatown? part of it is super happening. Similar to HK flower market but smaller. lolz pardon my direct translation.

aiyer...dun la like dat...u make me salivate physically and spiritually flying to singapore.

daphne:
haha...i shall declare myself as terribly hopeless if i still get it wrong when i go bck to sg after CNY.

jason:
Happy CNY to you too! Have a safe trip back to Ipoh :)

cokeworld citizen:
Back in KL for CNY already lor, but heart still in sg lar, thanks to the jap food over there :p
Next stop gonna be jap food in chinatown *drool drool*