Haik~It's Have Your Sushi Day!

Further to President's request, JFKA's members are obliged to update regularly on exotic Japanese eateries so as to benefit the community at large. Coming to the mid of August, coupled with mega sales around, not to mention that I'm quite broke by now, I would like to share with you all on some affordable and friendly-to-pocket japanese fast food.

I was tempted to try this Japaneses fast food joint because of the tremendous crowd and long queue @ the Curve's branch. Attempted to join the craze twice, but the horrendous queues were way too long and char siew bao just can't wait when it comes to food.
Little did I realise that Sakae Sushi has another branch @ Bangsar Village II as well, and most importantly, it's quiet and empty!

Browse thru the menu and you will find that the pricing is much more reasonable than other commercialised sushi joints like Genki and Sushi King. You can even get sushi or side dishes at as low as Rm1.90.
Another fun point is that the ordering system is computerised. Make your pick and place your order with a click. The online menu is very interactive as well, it depicts and describes the type of dishes in the menu concisely. We were having fun playing around with the computer and took more than half an hour to place our order...hehe... 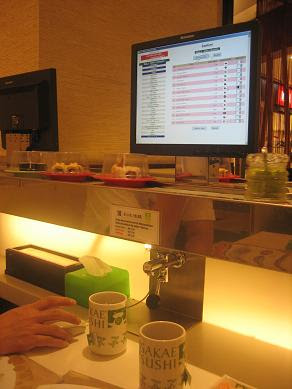 Felt like ordering from the kiddie menu too. Awww...the presentations are so cute and creative! 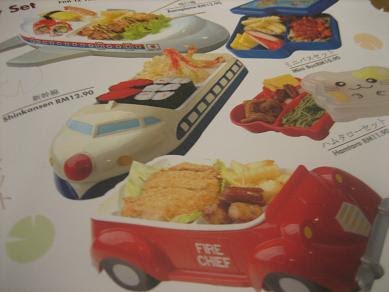 The sashimi selection is reasonably priced from Rm5.90 to Rm9.90. We had the fresh hotate (scallops) and white tuna. Too bad they were not up to expectation. Fresh but not very good cuts. I know, can't expect much from these kind of pricing rite? 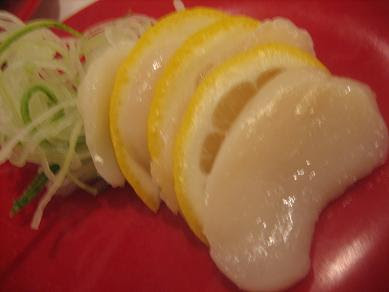 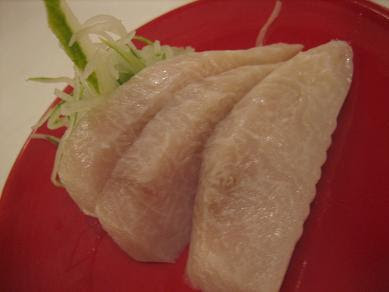 Huh, a Chinese tea pot in a Japanese restaurant? Wanted to try this cus the presentation looked so interesting in the menu. The teapot was filled up with soup, vege, fish and chicken chunk. Priced at Rm8.90, the portion was achingly small. Not worth the try :( 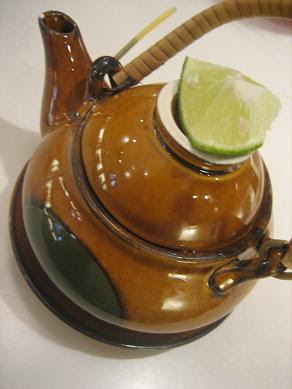 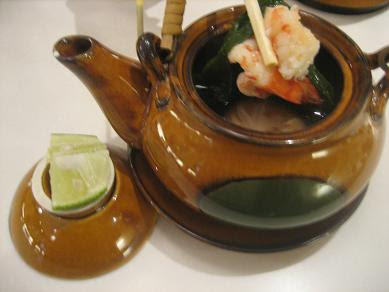 The maki rolls look so attractive and delicious in the menu, but then again, don't be deceived by the look. We had the dragon roll (Rm5.90) which was a total disappointment. Sushi Groove definitely fares better on this. 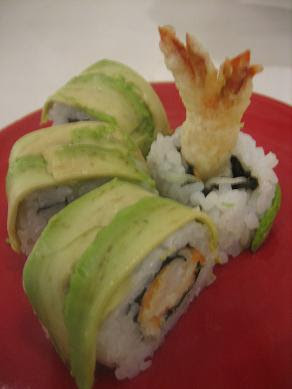 Sushi Groove @ One Utama
Groovy! This is another new sushi outlet in town that I finally managed to try (err...after reading bloggers' reviews a few months ago). I was especially attracted by its colourful menu with all the funky names but the food selection is limited though.
The pricing is above average, ranging from RM6.90 to RM15.90 for sushi rolls but the portion came reasonable and tasted better when compared to Sakae Sushi.
We had a bowl of Unagi Don (RM18.90), topped with a generous layer of unagi. We love this very much. Somehow I find the unagi slices very delicious, different from the unagi served in other restaurants which can be too salty or sweet. 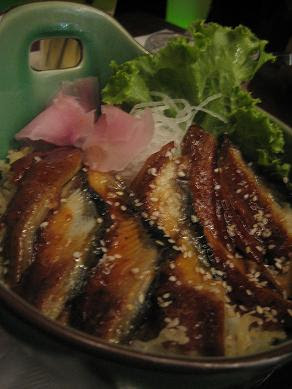 I just love the presentation of their sushi rolls. This flying fish roll (RM11.90) was wrapped with tuna sashimi and omelette. A very innovative yet pleasant combination. 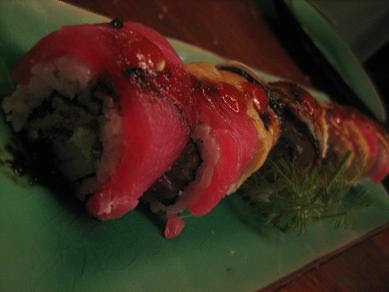 Different from the usual boring japanese food, Sushi Groove attempts to stand out from others by adding crunchy tempura bits into sushi, bibimbap, bento and noodles. At first we appreciate their creativeness but then we realised that all the food that we ordered came with these obligatory crunchy bits. To much of the good things can sometimes be a turn off.
Other reviews:
masak-masak
meiyen
wmw
Posted by Xiu Long Bao at 12:44 AM

Wah, that's a lot of japanese food, O Honorary Lifetime Member! Now you got me craving for Jap food too!

do they really serve kiddie meals in those containers? i think dat will coax my boi to take his japanese meal!!! thanks xlb

btw many happy return of the day in advance. appi burpday!

ahahah...aiyoh means i havent meet my requirement as a member yet..havent got a japanese food review for some time..but wait..i think i still have some ninja jones picture kekek..

haha...i also don't quite understand why sake sushi @ curve is forever packed and ppl would still queue for it though da food, so so only.. really speechless :p

Eh, I just went to Sakae Sushi just 2 days ago. Btw, they have buy 1 free 1 for red plates (RM5.90) during weekdays if you use Citibank credit card to pay. Quite a bargain

the Japanese exclusive club is getting more amd more chic and all that, and colorful !

the food at sakae sushi is not up to the standard of sushi groove? I've not tried sakae sushi yet.. but sushi groove rocks. Like eating there :P Oh.. I crave for japanese food now. Gonna drag Chris out for more soon.. *ngek ngek*

Sushi Sushi!
Of the two, i think sushi @ groove is d best!

Wow...lots of sushi to start me craving for some. Quick, we need another meet up for the association!

Happy Birthday again! Hope you got to eat lots of Japanese food this time round.

president LL:
Oh, we need to meet up soon for japanese food galore to have ur craving fixed!

meiyen:
Maybe bcus of the pricing. I didn't expect it to be that cheap. but that also means quality compromised, sad...

kok:
wow, but that is considered cheap in aussie? i always have the RM14.50 sushi buffet bck in aussie. Cheap but less varieties...so stuffed with sushi after dat...uphold the kiasu spirit!

christine:
haha...faster drag him out for japanese food. I luv sushi groove too, their sushi selection is very creative n interesting.

CSB:
yalor. but save sakae as the cheaper alternative to get japanese food craving fixed?

boo_licious:
yes yes! we need to meet up soon with all the fresh sashimi & sushi...oishi! TQ for the bday wishes :)

xiu long bao,
Ermm...that's considered average lah. Yea, here there's all you can eat sushi. Aud$20! You have a time limit of 1 hour to stuff all the sushi into your stomach! My record, only 15 plates. hahahah!

kok:
terror lar u! 15 plates of sushi??? Must be very stuffed after dat? haha...somemore within one hour...Salute salute!

president LL, we may consider recruiting this terror eater into our group.

xiu long bao,
No only that, I had few cups of green tea. hahaha! I was so full by then and felt like vomitting while taking a bus home. Never want to do this again. hahaha!

So how? Can qualify masuk your group? haha