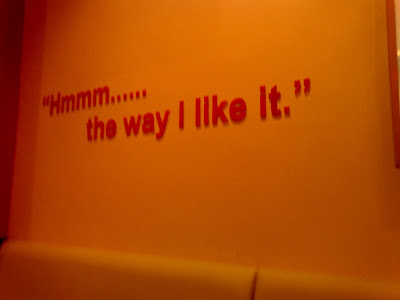 I had a hankering for waffles n' pancakes lately so we dropped by this waffle joint last week to fix my cravings :) The range of pancakes n' waffles offered by Waffle World is not as extensive as Paddington's but the price is reasonable when compared to the latter a.k.a pocket burner.

I had a glass of Apple + Cucumber juice (RM5.50) served together with finely blended fibres. Sounds yucky? But it was nice n' refreshing. 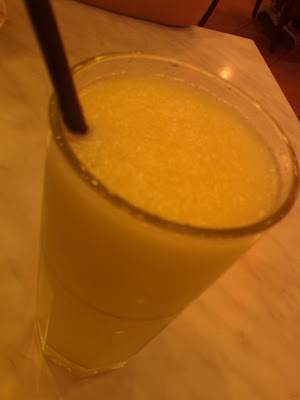 Char Siew Bao's Fried Seafood Spaghetti (RM17.90), he complained being deceived by the nice picture in the menu which depicts a few big prawns and mussels on top of the spaghetti but it turned out to be like this..... 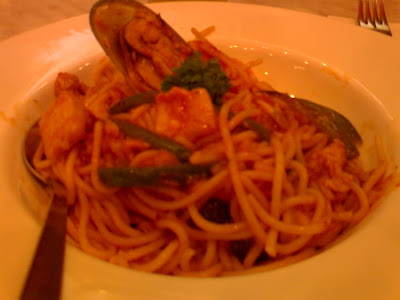 Can you see the tiny lil' prawns? yeah...so small that they were hiding under the spaghetti strands. But anyway, can't expect too much when dining out at these places.

I had a plate of fish cutlets wiv oriental sauce (RM10.90)--which was essentially sweet n' sour sauce served wiv a small scoop of weird tasting orange peel flavoured rice and lotsa greens. The serving was huge but nuthing special about it. 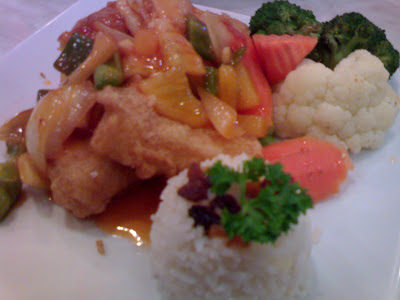 This blueberry pancake topped wiv vanilla ice-cream (RM6) saved my frus. I luv the hot n fluffy pancake (and I found some small bits of blueberries layered in between!) which goes really well with vanilla ice-cream, albeit abit lousy on the presentation side. 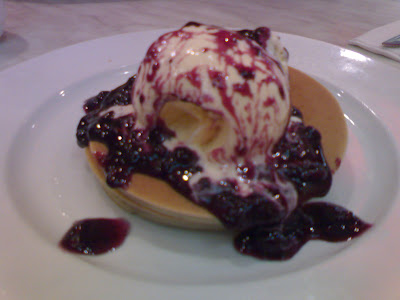 Conclusion: Dun think I'll drop by this place for hot food again. Maybe... only for the pancakes n' waffles.

Cucumber juice with sour plum is nice. Can't imagine how it taste with apple... and what's "blended with fibre"? You mean they added "fibre"? The waffle... I want I want!

why no waffles 1??..yeah the presentation for the pancakes albeit abit messy but definitely looks as good as it sounds...noted: dun order your main meals there..

kok: cucumber is gud for ur health! hehe...btw, the combination was gud, no odd cucumber taste at all!

jason: haha...i think everything goes well wiv sour plum :p the juice was good, no odd taste at all. They blended apples n cucumbers together without removing the fibres. Gud for digestion! The waffles n pancakes from Waffle World is gud n the price is reasonable too, must try ohh!

someone who is constantly craving: i was attracted by the super nice n yummy pic of the blueberry pancake in the menu. But anyway, i tot the ingredients used to make both waffles n pancakes are the same? Waffles are just square version of pancakes while pancakes are round version of waffles (??) Yes, dun order main meals there, waste of money oni.

I think I'd like the apple/cucumber juice. Sounds really refreshing. Too bad abt the other food, tho.

tried their waffles and not too bad!

lyrical lemongrass: thx to the cooling cucumber which made the juice so refreshing :) Sad case for the hot food but the waffles n pancakes are edible.

I have only been eating the waffles here and enjoy them. The main meals didn't appeal to me as I sat around and saw other people's orders.

i recalled trying it's waffles when it first opened some years back. not bad, but donno why i've never return :p. still prefer the plain, simple waffles served at teapot cafe..*drools*

wmw: Luckily u didn't try their mains. I enjoyed my nice lil' pancakes too!

sc:so everyone seems to agree dat the waffles are gud ^_^ simple waffles from teapot cafe? how gud isit?

xiu long bao,
Really ah? Cause the smell of the cucumber really weird. I don't mind taking it raw but juice... eee... hahaha!

I like to try out the paste, been weeks since I last ate some, kind of craving for some due to looking at your picture, and then I like to try out some of the rice as well... and the dessert.....damn!

It's been a while since i visited yr blog. Happy to update myself with all yr food review. i tried their waffle with ice-cream, simple yet delicious!!

I miss MELAKA food so much. Must plan a trip next time

kok: i dun think they blended the whole cucumber so the taste is not dat bad ;p I dun really like eating it raw, the taste lagi weird lah!

kay: u can fix ur cravings @ italiannies which serve better quality pasta ^_^ the dessert selection @ waffle world is gud!

I always walked pass this place but never got the chance to try. I find your plate of pancake quite appetising leh. Hope to try it soon.

the waffles at teapot cafe are served wth butter & honey or ice cream..simple, but good. love the scones, apple crumble and bread and butter pudding there too..

precious pea: Must try! only the pancakes n waffles btw.

sc: i luv scones! must have my tea break @ teapot cafe one day :)

xiu long bao: Yalor, my list is getting longer day by day ler... btw, it might be a bit late but I'm gonna call Elina for the reservation on 27th *finger crossed*

xiu long bao,
Raw cucumber is good! When you have it in Rojak, nice right? :P

jason: U r attending the KLUE event? It is never too late. Hope to see u there :)

Man niggas idk
what r yah talking
about but the thing i
know is that i love waffles.... :)